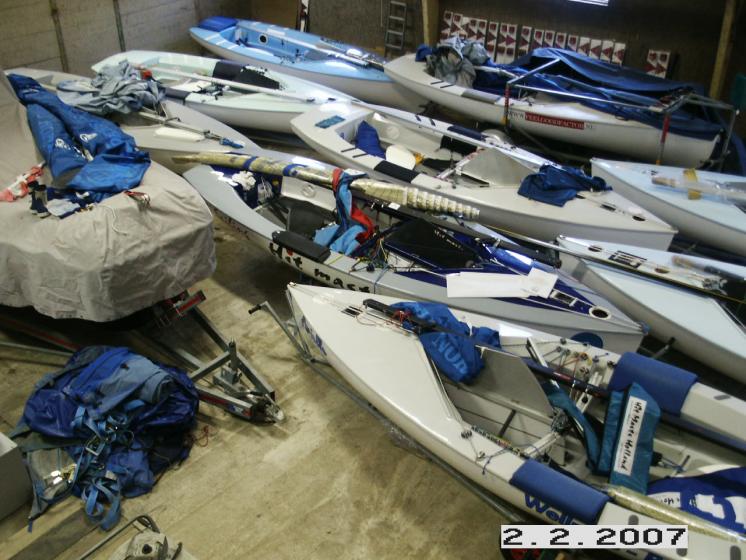 There are few Finn sailors that have not shared a coffee with Jan van der Horst around his kitchen table. For 25 years he delivered Finn dinghies, masts and sails to every corner of the world, but recently he sold the HIT Masts company. Sailing had become his work, now he wants to return to sailing as a hobby.

It all started in around 1970 when Jan got his first Finn at the age of 16. The virus has not left him since – Finns for 45 years now. Jan finished his study as a landscape architect in 1979 and took over the farm of his parents-in-law a few years later. It was a modern big farm in new reclaimed land set four meters below sea level. For years he farmed all kinds of crops from potatoes to tulips beans and sugar beets. Beside the farm he started up a company that produced injection equipment to inject animals with medicines. This company is now the main business selling products worldwide. So there was more than just farming and the combination of the Finn virus and running companies were the basis of staring up the HIT Masts company.

But
“Once you are in this business, you’ll end up working,” said Tim Tavinor to Jan van der Horst (61 now) before the conception of HIT Masts. How right he was. Jan started in the late 70s with Finn sails, and ended up selling masts, boats and sails. It was hard work, at the farm, at regattas and even if required during the holidays.

The Early Years
Hit Masts started as a result of the introduction of carbon masts in the mid 1990s. The masts were originally wooden, then aluminium and the logical development was to carbon rigs.

Jan: “Carbon masts were 3 kg lighter than the aluminium masts. There was huge demand and the market was wide open. There were some manufacturers of carbon masts for the Finn, but mast builder Thomas Wilkes from the nearby town of Lelystad – who had already been building Europe masts for the Olympic trialists – thought he could improve the design. However he had a limited knowledge of the Finn dinghy, no contacts in the Finn class, minimal resources and was looking to start his own company.” When Jan and Thomas met all the pieces of the puzzle began to fit together and HIT Masts started in 1997.

Trial and Error
Thomas started manufacturing round (teardrop form) profiles that Jan would bring to the market. It was not an instant success.

Jan: “There were a lot of problems with the first masts, reliability and the right material choices were improved by trial and error.”

Thomas: “Engineering was complex and did not simulate the masts correctly.”

But within a few months of trial and error the right mixture was found. Thomas built the masts and Jan sold them, keeping a good record of how the masts performed on the water. Together they developed their own measurement system and nurtured the market.

Jan: “Our policy was never to leave the customer without a mast. If a mast broke due to manufacturing issues it was quickly replaced without any costs.”

Quite possibly was this the main reason that Finn sailors were willing to take the risk with the new HIT Mast. When Jan brought 20 masts to a regatta, and laid them out against a washhouse wall for all to see he sold them all within the shortest time.

“The start-up costs were perhaps a bit high, but the demand was immense,” says Jan. “The first batch of masts sold like hotcakes, especially when the race results began to reflect the performance of the mast. That Larry Lemieux won the Masters twice with a HIT carbon mast was enough to convince the doubters. Suddenly everyone wanted one.”

The Partnership with Devoti
‘Everyone’ was, at that stage, primarily the Masters amongst the Finn sailors. That was also the target group for Jan. By keeping the price relatively low it was easier to build a reputation for his company. Having sold almost 200 masts in a short time Devoti Sailing got in touch. “A mast. You’ll need a boat with that!” Devoti Sailing was interested in a partnership.

The result was a dealership whereby both HIT Masts and Devoti held rights to sell complete boat and mast sets. This partnership was based on respect for each other and an unrestricted market share. For both parties, and for the customers, this was an attractive combination.

Jan: “As dealer for Devoti I sold hundreds of boats. Primarily because I made sure that I always had a large stock of boats (up to around thirty hulls) available at the farm. If a boat was not quite what the customer wanted, there was sure to be one that was perfect. The sails and trailers came later as a natural progression. But my basic principle was that there should be no disappointed customers. That is how I nurtured the reputation of HIT Masts and the customers trust. I think I succeeded.”

Wing Masts
Around the millennium a new trend started in the Finn world, the wing mast. The English manufacturer Boyce Spars had entered the market, but was unable to make a profit from the production. Building the wing mast was proving difficult and the tendency to break easily was returning. However Thomas was confident that it would be possible to make successful masts in the Boyce mould and so the decision was made to purchase the mould. HIT Masts became the owner of the mould where more than 1,000 masts would be produced in the years thereafter.

Jan: “By using pre-preg carbon, carbon fibres with the resin already impregnated, and compressed air, Thomas was able to optimise the resin and laminate layup throughout the entire mast. But we struggled with the design in the first months. The masts need to bend more fore and aft which was in conflict with the natural stiffness of the wing profile. Once this was controllable then we were able to concentrate on the precise design of the bend curves.”

HIT Masts for the professionals
This last development made the HIT mast an interesting prospect for the professional market. These sailors often knew which bend curve they wanted and this became a hot topic of discussion even for those lower down in the ranking and the Masters. The quality of all the masts needed to be raised. The masts were supplied with measurement certificates and bend curve data. Sailors could compare data with each other. The HIT Wing masts scored at international regattas with world champions and Olympic medalists.

The Optimal Curve
“By following the results of our masts on the water and keeping track of which masts performed well, we gradually discovered what the optimum curve for a mast should be. That was my method. Thomas and I learnt an immense amount from the building and tracking of over 1,000 masts. We sponsored professionals such as Pieter-Jan Postma who tested many masts for us. We received lots of feedback from the top sailors. These were all important moments in the learning curve. With this knowledge I was able to offer better advice to my customers, without giving away specific curve details of a mast. I was always careful with the data of a ‘super mast’ from a top competitor.”

Truth and Honesty
Irrespective of the importance of the bend curve of a mast, Jan never encouraged the practice of ‘building to numbers’. Why not? Jan: “Simply said, it is not possible. Any mast builder that says otherwise is not being honest. The fact is that the carbon and the process is too unpredictable to precisely determine the curve pre-production. We have re-measured masts from our rivals and seen that the reported curve was nothing like the actual curve. To avoid this, I measured every mast after Thomas had manufactured and measured them. Thus I knew for certain what the bend curve of each mast was and could always honestly inform the customer. By having 30 to 40 masts in stock with varying curves I always had the curve that a customer was looking for.”

That the masts from HIT Masts were generally cheaper than those of the other manufacturers was because Jan wanted to keep the pricing under control. His masts needed to be affordable for every sailor. He achieved this by building fast masts, but did not fit and finish them such that they became unaffordable.

New Developments
The latest development in the Finn class is the new hull form that recently became available. Potential mast buyers are cautious of investing at the moment. Also there are other reasons that have made the mast market more difficult. Jan has noticed that selling masts requires more effort now. Gone are the days of 20 masts up against a washhouse being sold within a few hours.

The End of HIT Masts
This is one of the reasons that Jan has decided to pass his company on. He is also getting older and after 25 years has had enough of the boat and mast business and has moved on to a new trailer project under the name of HIT Trailers.

Around the same time that the first two trailers were delivered last year a buyer (two good friends) showed such interest in taking over HIT Masts that Jan decided to let it go. In one deal he sold everything to Dinghy Racing Centre, the name, the image and all the stock of boats, masts and moulds.

A good feeling
How does Jan look back on the last 25 years? “With a warm feeling. I enjoyed HIT Masts greatly and have gained many friends over the years. It was also unique that many deals were sealed around our dining room table, in a more personal atmosphere. Very cosy. But if your hobby becomes your work, you risk loosing your hobby. That happened to me, I would like to get back to Finn sailing as a hobby. It is wonderful to sail in events with a degree of anonymity. It will be different travelling to the Masters without 10 or 12 charter boats in tow.”

And Dinghy Racing Centre?
“I wish them good luck for the future and hope that they forge a successful path.”