The Finn gets under your skin 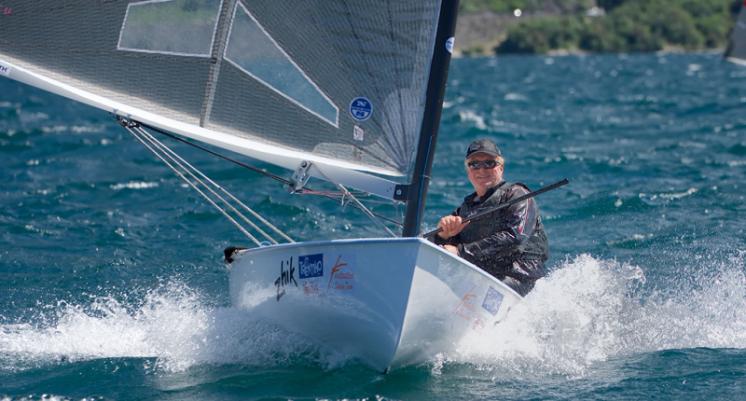 Tim Tavinor talks about his time in the class and his return with a new boat with Petticrows.

There are few people who have had as big an impact on the Finn class as Tim Tavinor. In the early 1990s, alongside Luca Devoti, he helped create Victor Boats and the Devoti hull that transformed Finn sailing worldwide. After helping move the boatbuilding operation, by then called Devoti Sailing, to Eastern Europe, in 2005 he moved away from Finn building and bought Petticrows boatyard in Burnham-on-Crouch, where he carried on the company’s tradition of building world beating Dragons.

In 2014 he returned to Finn production, with the release of the Petticrows Finn. Using processes and technology that were not available 20 years ago he says the quality has come a long way in two decades. Tim reckons he has the most symmetrical and fair Finn hull ever built. “We did a lot of work on the hull and the mould. Our production boats are really good quality without any secondary finishing needed. A lot of detail has gone into the new boat.”

And the much rumoured shape. “It is reasonably close to the Rita shape (Ben Ainslie’s boat). We looked at Rita and we looked at all sorts of shapes. Rita was really interesting actually. When you measure a boat all you get a is snapshot of the shape at the stations but the beautiful thing about the scanning is you get a complete overview of the shape so it’s quite interesting to do comparisons. We do a lot with the Dragons if we want to get a feeling for the reason that boats are performing differently.”

“If you overlay you look at the section – that can give you such a misinterpretation of the shape – you are far better off just overlaying the scans and you get a 3D colour map of where they are big and where they are small and how symmetrical they are and that’s the biggest indicator of the differences between boats. It’s really interesting to do.”

“So I’ve no idea what Rita was when it was first made. I know the section numbers but not the overall shape. But they’ve done so much fairing over the years and it underwent so much work. And it went round the world so many times.”

Changes
Petticrows has also introduced a few innovations. Gone is the foredeck breakwater, but the boats have a simplified fit out with steel ring deflectors on the control lines inside of blocks, recessed toestap tracks as an option, recessed hatch covers, and a longer control line console. “One thing we did is to make the control line console a bit longer. To be honest when I last sailed Finns I thought all the cleats were too close together so I though we’d spread all this out a bit further. We moved this whole area forward. We elongated it by 100 mm and pushed the front corner forward. So we can spread the cleats out, which make it easier.”

“Because the centreboard is so flat and straight you can make the case really tight. Normally the reason you have a lot of wobble is not because it’s quick or it makes no difference, it’s because the centreboards are never flat so you always have some wobble so they go up and down.”

“The centreboard is a big job: not easy at all. It’s really specialist engineering work. When I was racing Finns I’d have loved to have a centreboard of this quality. I always tried but never got a decent one. You can just feel it. It’s been machined from a bigger, solid piece of aluminium and PTFE coated.”

“It’s special stress relieved material, so when it’s machined there is no stress in the material to bend. Often when you machine a centreboard you’ll get a nice flat plate and think it’s really flat and then cut the centreboard and there will be some residual stress in the aluminium and it will bend.”

“So this one is completely flat and completely straight. You can talk about the hull shape and stuff, which is of course important, but one of the fundamental things that is easy to do it to get everything lined up. If you get everything straight and lined up – your rudder centreboard and mast – and everything symmetrical then that’s half the battle. And it’s not easy to do.”

How much more symmetrical are the new boats? “It’s hard to say. You never start off to make an asymmetric boat, but our experience, the available materials and technology has improved so much, but I wouldn’t like to make a comparison.”
He says the stability of modern materials makes a huge difference to the construction process. “It all starts at the design stage, to the manufacturing of the plugs, to the moulds, to the material you make the boat from. They all contribute to the quality and the symmetry of the boats, and also its compliance with the original concept.”

“When we did the first Finn mould [in 1992] we got 15mm in overall shrinking which we thought at the time was a disaster. But as we built more moulds and gained experience that of course changed. That’s the difference in knowledge and materials today.”

Why is he back in the Finn?
I think the Finn gets under your skin. I sailed a Finn from when I was 18 years old and I just loved it.

The Finn is a successful boat and remains a successful boat because it is just basically a beautiful boat. The Masters circuit is just so well supported by people that have previously raced Finns at different levels because they just love the Finn. They’ll go off and sail different things, and always have fond memories, but they always come back to the Finn to meet up with their old friends.

There’s no doubt when they changed the rules on the aluminium to carbon masts and freed up the position of the deck ring, that made a massive difference to the popularity of the boat. I don’t think we’d have a Master’s circuit today if they hadn’t done that. In fact I think the Finn would even exist today as an Olympic boat. In some ways it was just so heavy on the helm and you had to hike so hard and you had to have a weight jacket.

At that point it was a brute of a boat, but now it is a refined boat. I think it is a very refined, and technical boat. The old guys have lost a bit of their strength, but they certainly haven’t lost their appreciation of how to trim a boat and it’s a boat that rewards good trim and good steering.

And you can fiddle around with the sail and masts, soft masts and stiff masts, different mast rakes, different leach tensions: there’s a never ending amount of things to play with. And of course a lot of the modern boats don’t give you the opportunity to play with anything.

So I think the Finn is just a wonderful boat. That’s one reason I came back into it – because it gets under your skin. I love the Finn; in the same way I love the Dragon.

I started sailing a Dragon 25 years ago. People say to me, ‘why are you so enthusiastic about the Dragon, it’s so old.’ Yes, it is old, but it’s still in existence and it’s popular because it is good. All the old designs, like the Star boat as well, if it wasn’t a fundamentally good boat it wouldn’t be in existence. It would come and go as so many of the new and modern boats. There is something fundamentally not good about some of the modern boats; they just come and go like a fashion. With the Finn, Dragon, Star, there is no fashion; you also see the OK Dinghy and 505 thriving. They are all popular boats because there is something fundamentally really good about the design.