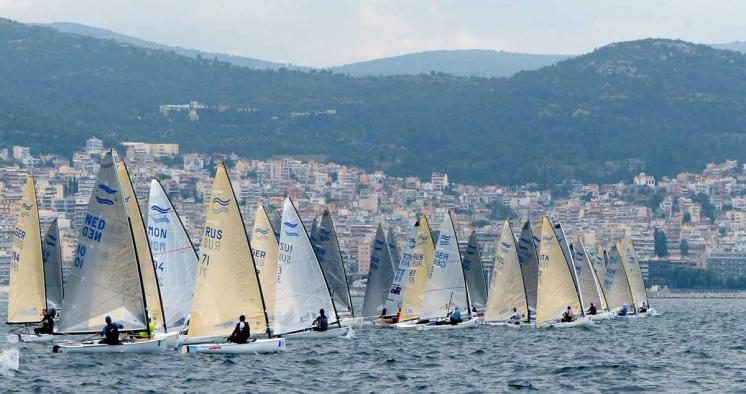 Greece with two race wins to lead the 204 boat fleet. Vladimir Krutskikh (RUS) is second after winning one of his races, while Allen Burrell (GBR) is third. The other race win went to Karel van Hellemond (NED).

The day proved to be challenging for race officials and competitors alike with the wind never staying consistent for more than one leg at a time. The fleet of 204 boats was split into two groups, divided using a randomised number process that allows all group allocations for each day to be calculated at the start of the regatta.

The sailors arrived at the Nautical Club of Kavala on Monday to be greeted by a building breeze and racing started on time at 11.00. However it was a series of non-starts before racing really got underway.

Yellow group started with a general recall, but by the time of the restart only half the fleet had returned. That race was later abandoned after a major windshift on the first beat. It finally got away under black flag only to be subject to a series of major windshifts on the second upwind and downwind. Laurent Hay (FRA) lost a good lead when the sea breeze filled in from the right, but others lost a good deal more places and ended mid-fleet. Karel van Hellemond (NED) was the beneficiary to win from Wouter Molenaar (NED) and Hay. The second race was sailed in a more stable and solid breeze, allowing oscar for free pumping to go up at the first top mark. This time Krutskikh led all the way to win from Dimiti Petrov (RUS) and defending Masters category winner Aleksandr Kuliukin (RUS), to make it a Russian top three.

Blue group was also beset with problems. After two general recalls, the first race was abandoned at the top mark when the sea breeze filled in with a huge shift to the right. But whatever the wind threw at the fleet Tokovoi showed amazing skill to win both. In the first race he won from Martijn van Muyden (NED) and Piet Eckert (SUI). Allen Burrell (GBR) led at the first mark in the second race, but was soon in Tokovoi's wake downwind. Burrell held on for third, after Felix Denikaev (RUS) crossed in second.

Van Hellemond described his race win. “I got a little bit lucky today. I had a good start and rounded the top about sixth. Then I had a good run and on the second upwind I saw the pressure on the right and went for it and passed the mark first. They changed the course then and it made a long reach to the finish. It is a good start to the week. I think it's going to be the whole week like this. I saw the forecast and it looks like today.”

Hay said, “Two tricky races with big shifts and pressure from 8 to 13 knots. I had bad luck in the first race because I was first with comfortable lead but a big right shift of 40 degrees jeopardised the second beat and I finish third. Grrrrr! In the second race I had a very bad start and was 20th at the first mark. It was free pumping, I never give up, and I recovered downwind to finish fifth. Tomorrow is another beautiful day.”

Three times Masters world champion Andre Budzien (GER) didn't have the best start and was on the wrong side of the big shift. “It was a black monday for me. I had a really good pin end start in the first race and then I was third. On the second upwind the sea breeze came from the right side and I was on the left with no chance to come back and I finished 60th. In the second race the start line was difficult. I thought it was a general recall, but it was individual, and it was hard for me on the first upwind and I finished 30th. It was not my day, but we will see what happens in the next few days.”

Burrell said of the blue group, “On the restart it was still shifting to the right. If you started by the committee boat and tacked into the shore, there was also more pressure over there. In the second race I rounded first with the Ukrainian just underneath me and it seemed to pay to go right again. It was also pretty close at the finish. It was a good start to the week for me, so let's hope it carries on, but there is a long way to go.”

The Finn Masters attracts sailors from many nations and cultures. Charles Heimler (USA), who had a good day, summed it up nicely when he said, “I come to the Masters every year to enjoy an international event. I like going to nice paces, and I like seeing the friends I have have made. It's as simple as that. This year we have five Americans. I think that's the largest number we have had at Masters and it's great to see them all here.”

The Finn Masters are certainly enjoying a nice place this week, with most of the bars and restaurants along the beautiful Kavala quayside filled with Finn stories and tall stories every night. Racing in Kavala contines until Friday with two more races scheduled on Tuesday from 11.00. You can follow live race by race finishes on the event website each day at: http://www.finnworldmaster.com

View the embedded image gallery online at:
https://finnworldmaster.com/events/kavala-2015/item/228-yuri-tokovoi-masters-kavala-on-first-day-at-finn-world-masters#sigProId931e60f8f5
back to top 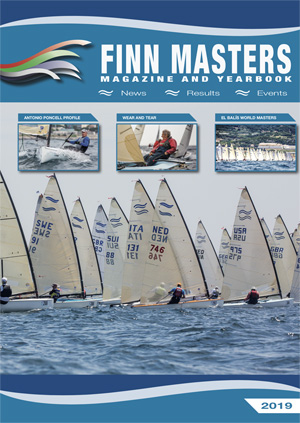