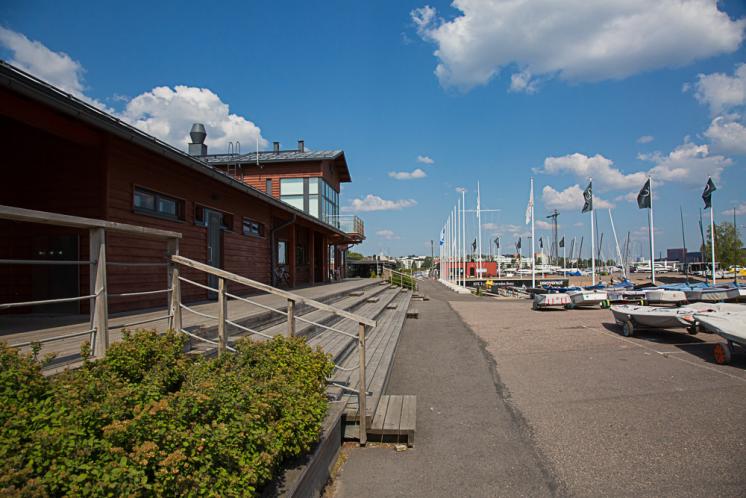 From the club website: Helsingfors Segelklubb is a Finnish sailing club founded in 1899. With 1,600 members and 600 registered boats, we are one of Finland’s largest and most successful sailing clubs. Club is located centrally on the west side of Helsinki in Lauttasaari, with excellent services and traffic connections nearby.

Launching: two 30-40 metre ramps next to dinghy parks. More than we have had the past few years.

The whole area is wholly owned by the club so they can decide what happens here. No regulations to stick to.

Space for camper vans (40-60 easily), with amenities available in the clubhouse – showers/kitchen/sauna etc

Also ample space to store containers on site. It is a huge area.

Restaurant: Huge indoors plus outside areas. 250 covers. Beer €6.75 for a half litre.

Shops: most of Helsinki’s sailing shops are nearby including WB Sails and a repair shop that can handle most jobs.

Offices: Main clubhouse has a conference room, with projector, for 60-80 people, plus a small room for 14 that is suitable for the jury.

Two smaller buildings near dinghy park. One is race office and one can be used for IFA/Media etc. 24 hour security, including overnight patrols.

Coach berth next to launching, but many other berths available.

Wide range of race official vessels, rib and mark boats. 10 safety boats (plus mark, jury etc) is no problem. After that will need to look further afield.

Course areas: Same course area used by the 470s in 2011. About 1.2 to 1.5 nm from club (just past the marker in the middle of the photo). Other course areas are available but not as big.

Bidding: Bid made by HSK in conjunction with Helsinki Sail Racing Management, which involves most of the major clubs and manages most of the big events in Helsinki.

1952 connection: The prizegiving can be held on the island where the 1952 medal ceremony was held – which is located on the east side of Helsinki. The podium belongs to the Finnish Olympic Association and we can use that in the same place as Elvstrøm got his first Finn gold medal. Would be nice to try and repeat the set up and positioning.

Accommodation: On Lauttosaari there are only two 3-star hotels, but a number of Airbnb apartments. Most hotels will be in central Helsinki. Suggestions nearby are the Holiday Inn and the Clarion (where they often have a deal as it is run by a sailor). Both are about a 15 minute walk. Can also access the Clarion by rib. Huge hotel capacity in Helsinki. Backpackers hostel is about €350 a week. Only campsite is about 12 km north of the club. Public transport though is very easy and frequent.

Public transport: Is very well sorted in Helsinki. There are bus connections (5 per hour) to a stop about 5 mins walk from club. Cycles can be hired (city bikes are €10 for week for unlimited 30 minute trips). Extensive tram and bus network, all very cheap.

Dates: Best dates third or fourth week of June or early July. In May there can still be snow. In early June the water can still be very cold. It is strongly recommended that the dates are made later than usual. Whitsun in 2022 is June 5. It can be run then, but there is better than even chance the water will be less than 10 degrees, and 50:50 chance of cold weather as well. By the end of June things normally start to warm up. In 2019, there was still snow on the ground in mid may.

Cons: Dates need changing, few restaurants close, accommodation is not close or very cheap, travel to get here is expensive – so containers/curtain-siders should be seriously considered for those not bringing camper vans

View the embedded image gallery online at:
https://www.finnworldmaster.com/events/helsinki-2022/item/732-preliminary-visit-to-hsk-july-2019#sigProIdf3d6307e27
back to top